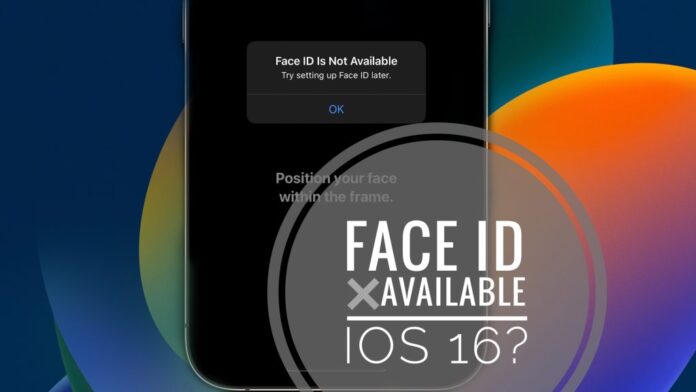 Posted in Errors and Issues by Mike on October 7, 2022

Face ID not available after update? Facial authentication stopped working on iPhone in iOS 16? Front camera is also showing a black screen? Prompted with ‘Try setting up Face ID later’ when you try to reconfigure it?

Face ID Not Working After Update?

This issue was reported by Jordan:

“After updating to IOs 16.0.2 my Face ID stop working, screen isn’t smooth while navigating and the volume buttons don’t work at all I have been struggling. I’m using an iPhone XR.”

We’ve found similar reports in this Reddit thread as well as on our older iOS update review pages, starting with iOS 14 and happening as recent as iOS 15.6.

How To Fix Face ID Not Available

After reading numerous reports it seems that this Face ID issue is reported for older iPhone models including X, XS, XR and 11. But we’ve seen reports for the iPhone 13 and 13 Pro too.

At the time of writing, there is no general fix, but you can try the following troubleshooting methods, which have worked for some, but failed for others:

Restarting device works as a temporary fix for some devices affected by this iOS 16 Face ID issue. A fresh boot brings the facial recognition back to life, but the feature will fail again sooner or later.

We recommend you to use the force restart trick described here.

Face ID problems can be also caused by grease or a worn out screen protector that can block the sensor from scanning properly.

Face ID stopped working right after iOS 16 update, out of pure coincidence or perhaps Apple might have hiked the sensitivity of the TrueDepth camera sensors, and a dirty lens might not be able to perform as it did prior to the update.

Remove screen protector, if it looks worn out and/or clean the front notch with a soft and dry wipe.

Other users have reported that gently hitting the front camera might unfreeze the Face ID.

If you tap the front notch gently and the facial recognition starts working, it means that you’re dealing with a hardware problem. Either the device was hit in that area or a screen replacement hasn’t been properly conducted.

In any of the two scenarios you will have to bring your device to a repair shop, even if Face ID started working again. Issue will most likely re-occur. 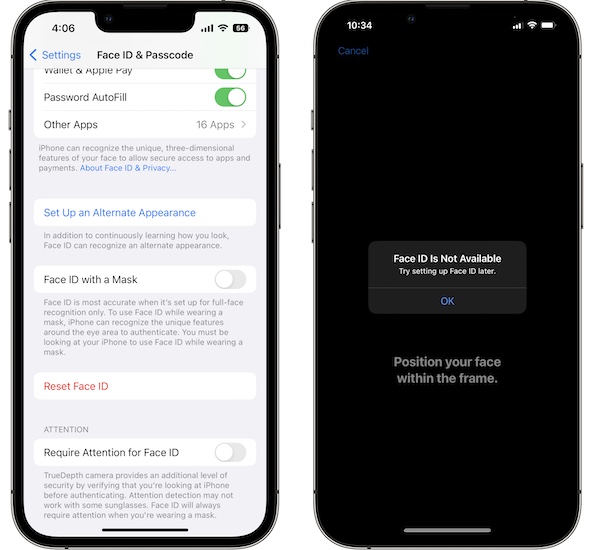 Another troubleshooting step requires you to reconfigure Face ID from scratch.

Fact: Be prepared to get the Face ID Not Available error, try setting up Face ID later!

Finally, you can try to clean install the most recent iOS 16 version available at the time of reading. This is done with the help of a computer (Mac or Windows):

Have you managed to fix Face ID not available in iOS 16? Do you have a better solution or other suggestions? Does the front camera work? Share your feedback in the comments please. Also, confirm the problem by mentioning iPhone model and any other useful details.

Related: You might be also interested in Face ID not working in landscape mode (a new iOS 16 feature). All detail available here.