Posted in Errors and Issues, Bug Fixes by Patricia on January 16, 2023

Having Facebook scrolling problem on iPad and Mac? Feed content jumping around on its own when you browse Facebook in Safari? This auto scrolling issue started after updating to iOS 16.2 and macOS Ventura? You’re not alone! 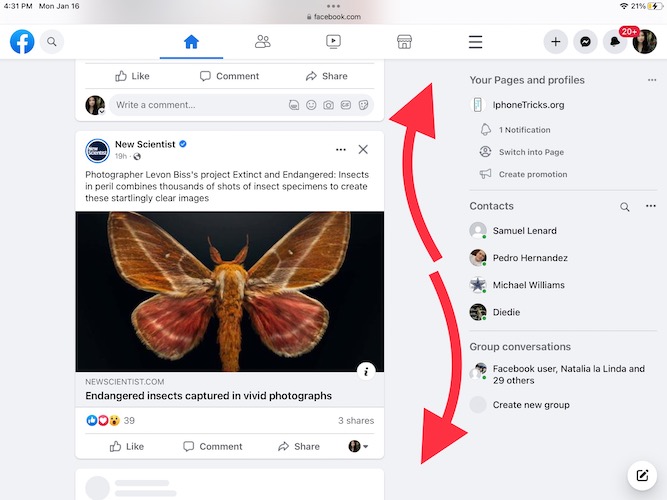 This issue has been initially reported by Jennifer:

“Since upgrading my 8th generation 128g iPad to iPadOS 16.2 i am having problems with Facebook. the page won’t keep still to read. My husband has the same iPad and upgraded to 16.2 and he’s having the same problem.”

The Facebook scrolling glitch has been immediately confirmed by Karin:

“I am also having the same issue with Facebook feed auto scrolling when viewing in Safari.”

“I am also having the same issue with Facebook after updating my iPad to iOS 16.2.”

We’ve tried to replicate this bug and indeed Facebook feed starts jumping around after about a minute of scrolling. The timeline seems to jump back and forth every time a scrolling motion ends and you want to stop to read the text!

Update: Facebook feed is also auto scrolling on Mac, if computer is updated to macOS Ventura, as reported by plotdoctor:

“I have same issue on both my MAC laptop running Venturi and iPad (OS16.2) using Safari, but not my old Mac desktop that runs Big Sur!”

Fact: Indeed glitch seems even more accentuated when browsing Facebook in Safari on Mac! The content jumps 5,6 times before stopping, while on iPad the auto scroll unfolds in only 3 stages!

How To Fix Facebook Feed Auto Scrolling In Safari

We’ve tried to quit Safari and re-open, doesn’t work. We’ve also rebooted the iPad and it doesn’t seem to help either.

Facebook must have changed something to the web version of its website and there doesn’t seem to be anything that you can do to fix this scrolling issue.

Hopefully Meta will be able to fix it server-side soon, as the problem is widespread. A thread opened on Apple’s discussion forums, yesterday has over 500 users confirming the scrolling glitch!

At the moment, we could identify two ways to bypass this issue:

For the time being, we recommend you to use the Facebook app for iPad (direct link).

We’ve tested it out and the feed scrolls normally without jumping around!

If you want to continue using the web version on iPad, you can avoid the Facebook auto scrolling problem by switching Safari in favor of Microsoft Edge.

Aparently, Microsoft’s web browser won’t allow the FB feed to jump around by itself. Use this direct link to download it on your iPad.

Credits: This workaround has been mentioned by danvin67.

Have you managed to fix Facebook scrolling problem in Safari? Do you have a better solution or other issues to report? Use the comments section and share your feedback!

Related: For other iOS 16.2 bugs and available workarounds check our detailed review!