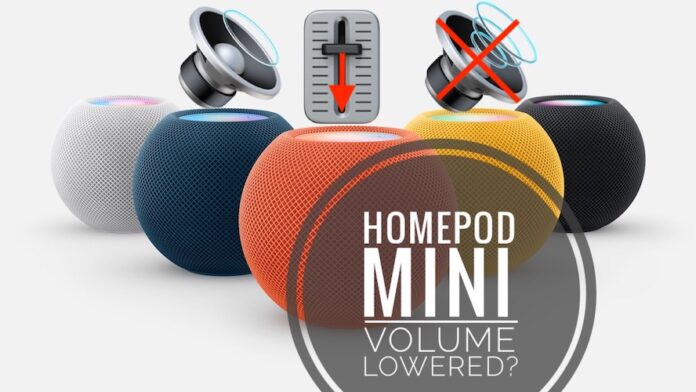 HomePod Mini max volume low after 16.3 update? Maximum Volume is much lower, at least 20% down from the previous audio intensity? Is this a bug or Apple has turned down the volume intentionally?

This issue has been reported by Ann (HomePod 16.3 RC):

“Homepod mini volume much lower after updating. Even maxing it out. it sounds at the entire volume scale has been turned down. anyone else hearing the same?”

To be honest, I can’t notice a difference. My HomePod mini updated to 16.3 RC doesn’t seem throttled. It’s not significantly quieter and I never use max volume anyway.

However, I found a thread with similar complaints on Reddit:

According, to the same thread Apple might have intentionally turned down a few notches the Volume intensity of the HomePod mini.

This decision might be related to the activation of the Temperature and Humidity sensors in HomePod 16.3. According to Apple,
the sensors could be affected by playing music at high levels or for long times.

Here is an exact quote from apple.com:

“Accuracy may decrease in some situations where audio is playing for an extended period of time at high volume levels.”

The general consensus is that Apple might have turned down volume on the HomePod minis on purpose to make sure that the temperature and humidity sensors provide accurate results!

This move could also offer additional marketing points for the HomePod 2 sales, Apple’s smart speaker that has been recently unveiled!

Is There A Way To Increase HomePod Mini Max Volume Lower After 16.3 Update?

Unfortunately, there is currently no option to bring back the HomePod to its original volume intensity if you decide to turn off the HomePod and Temperature sensors.

But this is a feature suggestion that we’re planning to send to Apple via the Feedback app. Are you also interested in such an option, or you prefer to sacrifice Volume intensity for sensor accuracy? Share your feedback in the comments please!

Important: HomePod 16.3 public release has been delayed for January 25! Not sure if this is one of the causes, but if you want to keep your HomePods’ volume intensity, disable automatic updates and stay on 16.2 version!

Related: HomePod temperature and humidity sensors not working after 16.3 update? Here is how to fix them!