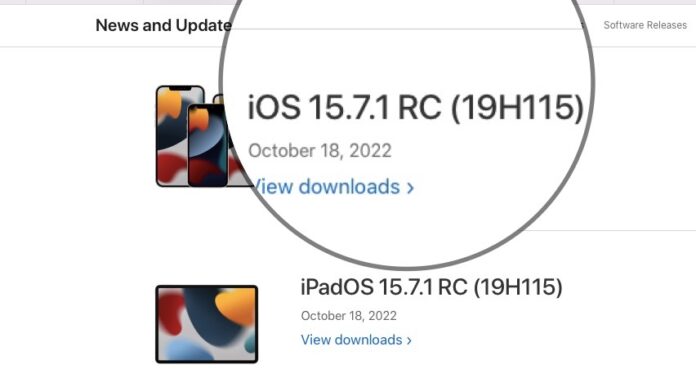 Apple plans to release iOS 15.7.1 build number 19H115 alongside iOS 16.1 on Monday, October 24. This is confirmed by the Release Candidate verison that’s available for download for Developers and Public Beta testers.

This version will show up only for iPhones that are iOS 15 compatible and are running iOS 15.7 or earlier.

It will be available over-the-air in Settings -> General -> Software Update.

Tip: If you have a device running the iOS 15 Beta Profile you’re able to download the RC version right now!

Fact: If you already updated to iOS 16.0.3 you will see iOS 16.1 in the Software Update section. To install this iOS 15 version you have to downgrade from iOS 16 first!

You will be also able to install this update via Finder (Mac) or iTunes (Windows), after downloading the .ipsw file specific for your iPhone model from the list available below:

Don’t expect any visible changes in this version. The release notes mention:

“This update provides important security updates and is recommended for all users.”

Most likely, this release will include security updates implemented in iOS 16.1 and made available for users that plan to stick with iOS 15 for the time being.

Fact: The security content of this update will be published here.

Issues reported for this update are listed below along with available workarounds:

Have you installed iOS 15.7.1 RC on your iPhone? Are you encountering any problems or issues that you need help with? Share your feedback in the comments! We’re available to assist you!