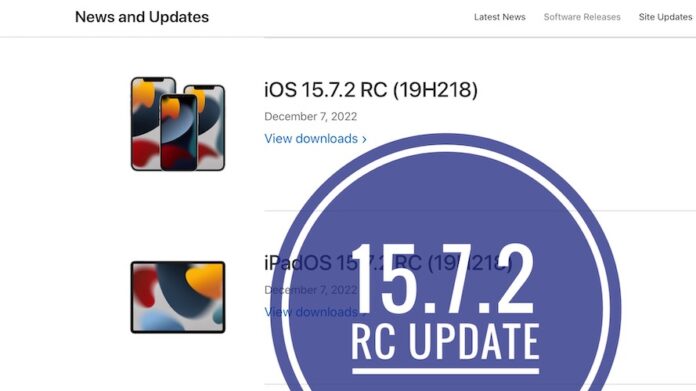 Apple has released iOS 15.7.2 RC with build number 19H218, which means that the public version will be rolled out soon alongside iOS 16.2! It’s a minor but important update that brings security fixes for iPhones and iPads still running iOS 15.

This release is available over-the-air in Settings -> General -> Software Update, for all iOS 15 compatible iPhone that have the iOS 15 Beta Profile installed.

Similar to 15.7.1, this version focuses on “important security updates and is recommended for all users.”

Problems encountered in this update are listed below along with available workarounds:

Problems addressed in the version are mentioned here:

According to iSoftware Updates on Twitter you can downgrade iPhone 8 and iPhone 8 Plus running any iOS 16 version to 15.7.2.

You need the appropriate ipsw files, a computer and a Lightning to USB (USB-C) cable. We will update the ipsw files here as soon as they become available!

All other iOS 16 running iPhones (excepting the 14 and 14 Pro models) can still downgrade to iOS 15.6 RC as shown in this step-by-step guide.

Have you updated iPhone to 15.7.2? Did you notice any other changes or bug fixes not mentioned in this article? What about new problems? Share your feedback in the comments.