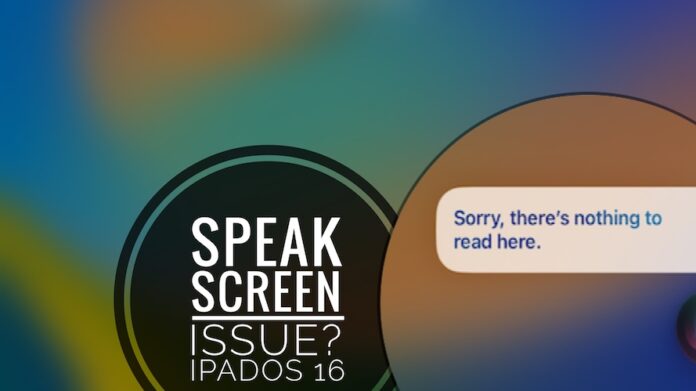 Posted in Errors and Issues, Bug Fixes by Mary on November 7, 2022

Speak screen not working on iPad after iPadOS 16.1 update? Siri won’t read out the screen when using ‘Hey Siri’? You get the default reply: ‘Sorry, there’s nothing to read here.’ This issue could be related to the iOS 16 Siri problem, that we covered a couple of weeks ago!

Speak Screen Not Working On iPad?

This glitch has been reported by John:

“Siri will not speak the screen after users install the 16.1 OS update. The screen dims a little bit and then Siri says: ‘Sorry, There’s nothing to read here.’ This happens with Apple News, Pocket, websites with Safari, etc.”

How To Fix iPad Speak Screen Not Working?

1. Turn Speak Screen On and Off

Sometimes, after an update, if a feature isn’t working you can fix it by disabling it and turning it back On a couple of seconds later:

Switch from Current Locale to English or the language that you’re using most of the time.

Workaround for Speak Screen Not Working

If nothing from the above works, you have to select the text on your iPad / iPhone, that you want Siri to read out and then command Siri no speak screen!

However, this isn’t an ideal solution for visual impaired users that might have a hard time selecting the text manually!

Have you managed to fix iPadOS 16.1 Speak Screen issues? Do you have a better solution or other problems to report? Share your feedback in the comments!