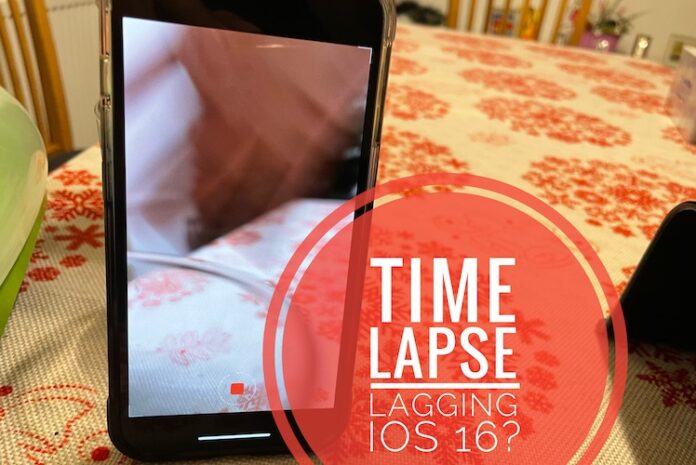 Time Lapse lagging on iPhone after iOS 16 update? Issue only occurs when recording, but the actual video plays normally? It happens only when using front facing camera or also with main camera?

This unexpected behavior has been reported by Pau (iOS 16.2):

“I have an iphone 14 plus. I only have issue (camera lag) with using the time lapse. I have updated my IOS to the latest software but still not fixed.”

We could replicate this issue only when recording time lapse in low light conditions. More, we’ve noticed that the screen lags only when AE/AF Lock is enabled!

“Laggy time lapse recording after updating to IOS 16. When I put the phone down, the screen starts lagging.”

“Why when i’m filming at time-lapse mode my iPhone 13Pro it gets the screen lagging only when the phone is at rest.”

“I have a question about time lapse. When i use it, it is really really laggy. If i put my phone on any surface and start to film, video is not saved and on if i film on back camera it is saved.”

How To Fix Time Lapse Lagging On iPhone

If you’re experiencing this issue please try the following to troubleshoot:

We’ve noticed that time lapse lags during recording when AE/AF Lock is enabled:

A Reddit user informs that he managed to stop time lapse lagging by enabling the following Camera setting:

This bug has been reported since the early iOS 16 versions. Some users confirmed that it’s been fixed by the iOS 16.2 update, but others are still experiencing it.

Apple will release iOS 16.3 on Monday, January 23. We recommend you to update to this latest build and inform us if it fixes the time lapse lag on your iPhone camera!

Did you manage to fix time lapse lag on iPhone in iOS 16? Do you have a better solution or other problems to report? Share your feedback in the comments.