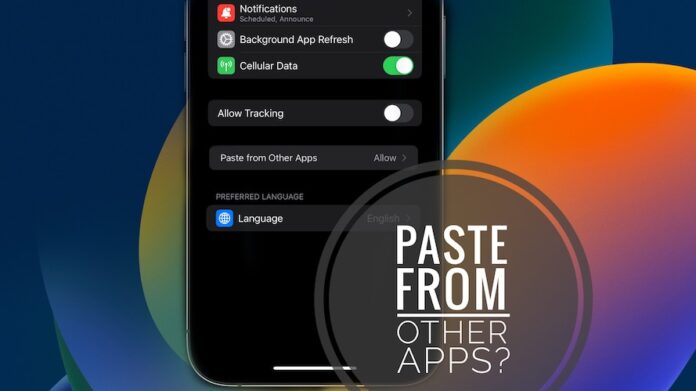 Paste from Other Apps setting

The new Paste from Other Apps setting is coming with the iOS 16.1 update and it aims to fix the annoying ‘Would you like to Paste from’ popups, that are exposing third-party apps when they attempt to copy the clipboard directly, without asking.

Paste From Other Apps Not Available?

This new option is available starting with iOS 16.1, which is currently beta tested and will most likely be released to the public by the end of October, alongside iPadOS 16.1 and macOS Ventura.

So make sure that your device is running iOS 16.1 or later to be able to see this setting.

Paste From Other Apps Not Showing?

If you’ve already updated to iOS 16.1 (beta) and are still not able to find this setting, be aware that it only shows up for apps that try to access the clipboard directly, without asking for permission.

If you’re manually selecting a text and copying it, you won’t trigger this privacy setting because iOS will recognize your action as intended usage.

Paste From Other Apps Options

This new iOS 16 feature is available in Settings -> [App Name] -> Paste from Other Apps.

It comes with three options:

Are you satisfied with the new Paste from Apps setting? Does it work the way it’s intended? Do you have other questions or iOS 16 problems to report? Share your feedback in the comments.