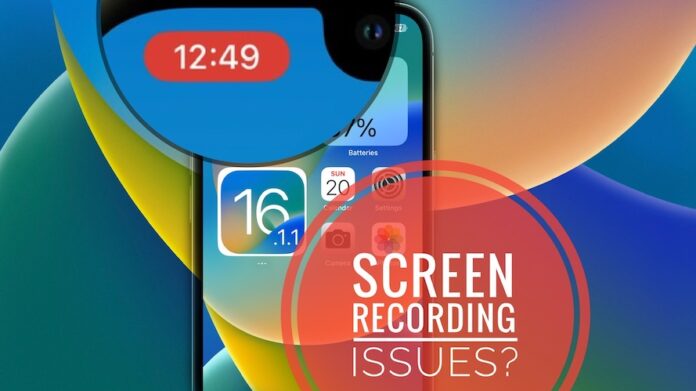 Posted in Errors and Issues, Bug Fixes by Patricia on November 19, 2022

Screen recording not working anymore after iOS 16 update? You’re not able to record your iPhone’s screen? Feature stopped working in iOS 16.1.1 too? Capture stops as soon as you leave the Control Center, or never starts once the countdown ends?

This issue has been reported by Callee:

“After downloading iOS 16.1.1 my screen recording stopped working and I have a iPhone 14 pro max.”

We couldn’t replicate the issue on any of our four iOS 16 running devices, but have found similar reports on Reddit:
1:

“iOS 16.1 Screen Recording bug, only records when I’m on control center. After that it stops as soon as i get off from there.”

If you’re experiencing this screen capture problem too, don’t hesitate to report it in the comments along with any useful info that could help us to submit a documented bug report to Apple.

How To Fix Screen Recording Not Working On iPhone

Based on users reports, here is what you can do to troubleshoot:

Apparently, the good old reboot will help out. However, it might not work from the first try. This Reddit user confirms that his device required a couple of restarts until screen recording started working again.

Tip: Use the force restart combo for quicker results. (Click & release Volume Up, Volumed Down and press & hold Side Button until the Apple logo is shown on the screen).

For those that experience screen recording problems on iPhone 14 or 14 Pro series, try to turn off AOD. This worked for Extreme_Doppy:

Tip: You can turn it back on after an iPhone reboot and screen recording should keep working! Does it?

Have you managed to fix iOS 16 screen recording issues? Do you have a better solution or other problems to report? Share your feedback in the comments.