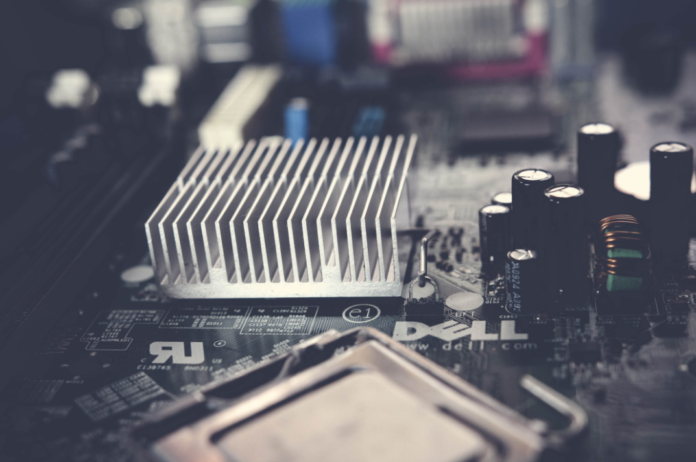 Sometimes, the CPU cooler that comes with your PC isn’t always enough, so many users try to find a separate cooler that can help solve their problems and keep their PCs from overheating.

One of the favorite CPU coolers today is the Dark Rock Pro 4. The Dark Rock Pro 4 is the family’s newest flagship, designed for power users and overclockers, who want to extract every last watt of cooling power out of a performance-minded, heat pipe-based tower cooler.

Inside, it manages to sandwich an extra cooling fan between its twin pair of aluminum-fin cooling towers, with 135 mm and 120 mm fans. The 120 x 25 mm SilentWings fan at the front propels air through the first tower, where it meets the 135 x 22 mm SilentWings fan in the back.

A common array of mounting gear, thermal compound, brackets, and even a two-way PWM splitter may be found inside the fairly detailed retail packing. A long-necked magnetic Phillips screwdriver, which will come in during installation, is another great addition.

The Dark Rock Pro 4 is a powerful cooler that can easily compete with many AIO 240 mm liquid coolers. The main advantage is obviously fewer potential failure spots and greater peace of mind during extended operation. Overall, if you want to design a high-performance system with a more modest aesthetic, this is a great cooler.

However, it’s not for everyone, particularly for those who are on a budget due to its high price. It’s also large and heavy. If these are dealbreakers for you you may want to consider these best Dark Rock Pro 4 alternatives instead.

Cooler Master is known for their mainstream cooling devices, which include everything from heatpipe air towers to performance liquid cooling AIOs, many of which have RGB lights as a centerpiece. The huge, dual-fan MasterAir MA624 Stealth, on the other hand, is ready to wow without any lighting accents. Instead, it has an all-black color pattern, creating a commanding appearance for people who prefer their flair without the flash. It also uses some cleverly integrated mounting and incorporates a third (extra!) 120 mm fan to give systems with tall memory DIMMs a little more freedom.

The Cooler Master MasterAir MA624 Stealth is a sharp-looking performer that strikes an enticing mix between heat mitigation and visual prominence. Six copper heatpipes flow from the base up through a pair of cooling fin stacks, which sit astride an integrated 140 mm SickleFlow fan capped beneath a brushed-aluminum top on the MasterAir MA624 Stealth. To secure the cooler against the motherboard cross brackets, a pair of spring-tensioned mounting bolts run from the top of the cooler down through the base mount.

Cooler Master offers two 140 mm SickleFlow fans (front and center) as well as an extra 120 mm for other configurations. The MA624 Stealth can be configured as a silent single-fan (center) layout for optimum RAM clearance or as a typical push+pull installation with the 140 mm front-mount SickleFlow fan. This comes with an expensive price tag, though, so if you’re on a budget, this might not be the one for you.

The IceSLEET X7 Dual features a unique design. Most of Iceberg Thermal’s products are titled “Ice,” but with the IceSLEET X7 Dual, they’ve manifested the term in the design, as the cooler itself resembles a large chunk of ice. The cooler’s two towers are essentially enclosed in a plastic casing.

A 120 mm RGB fan can be found on the cooler’s front. With a static pressure of 2.8 mm H2O, this fan will spin between 500 and 1850 RPM, pushing 76 CFM of air. The RGB connection on the cooler is a 3-pin addressable RGB connection; no RGB controller is included. You can get a better look at one of the heatsinks by moving around the rear of the cooler. You have a dense aluminum fin stack with adequate airflow between each fin.

When you turn on your system, the Iceberg Thermal logo at the top of the cooler will light up with RGB lighting. You’ll need to unscrew the cooler’s exterior shell to have a better look at the center fan and second heatsink tower. Remove the two side pieces first, then the top piece, which will also remove the fan.

The middle fan is a larger 140 mm fan. With a static pressure of 2.65 mm H2O, this fan spins between 500 and 1600 RPM, pushing 96 CFM of air. Also visible is the cooler’s real dual-tower architecture. There are a total of seven 6 mm thick, nickel-plated copper heatpipes in the bottom of the cooler. These heatpipes run from the cooler’s base to the top of each heatsink tower. One weak point of this PCU cooler, though, is that it’s too low for some chipsets. Also, its design isn’t for everyone, aesthetically speaking.

The ATC800 RGB is a 2 x 12 cm 2 ball-bearing RGB fan from Gigabyte that keeps your CPU cool without sacrificing elegance. This CPU air cooler features RGB lighting and a wired RGB controller, as well as a broad speed range that can be fine-tuned for maximum cooling or silent operation.

A stacked fin array helps to let cooler air flow into the heatsink, and the CPU cooler has an anodized brushed aluminum finish. Four Direct Contact Technology heatpipes have been constructed to maximize heat dissipation. As its name suggests, this CPU cooler has an all-new RGB LED design. With this, you can change the lighting patterns on the AORUS Falcon logo and fan blades. You can also synchronize lighting with peripherals to show off your personal flair.

What makes this cooler really stand out is its temperature indicator. Using this, you can monitor CPU temperatures and change fan speeds to lower temperatures. The fan speed control function also displays the state of the fan. The temperature of the CPU is exhibited through the lighting. The hue changes in response to CPU load and temperature. As the RPM rises/falls, the lighting indicator bars rise and/or fall. One downside of purchasing the Gigabyte Aorus ATC800 RGB is it’s a bit hard to install. If you’re new to this, it might be difficult for you to set it up.

The ID-Cooling SE-207-XT is an excellent choice for builders searching for larger-air cooling capabilities on a budget. It won’t perform as well as a $100 premium air cooler, but it does offer appealing performance for a lot less. The SE-207-XT from ID-Cooling is a seven-heatpipe, dual-tower assault on large air cooling with a name that is difficult to remember, but that may change soon. The SE-207-XT is a menacingly matte black PC that uses two 120 mm cooling fans with no RGB capability.

The SE-207-XT isn’t quite as massive as some of the more recent heatpipe coolers. While it is true that it will not be at the top of our cooling ratings, it is also not far behind the leaders. As a result, the SE-207-XT is an excellent mid-range, low-cost large air cooler for individuals searching for the cooling benefits of a large CPU cooling tower.

The SE-207-XT comes with a basic mounting kit that will work with most current AMD and Intel desktop CPU sockets. The Intel backplate has pre-assembled mounting posts, which makes it exceptionally sturdy and eliminates the time-consuming construction processes that are typical of backplate configurations.

A third set of spring wire clips is included, which can be used to connect an additional fan to the cooler for a push/pull/pull configuration if desired. A 3-way PWM splitter is also included and ready to handle the basic 2-fan arrangement or the triple fan setup right out of the box. Rather than ducting air all the way through the cooler, the cooling fins on each tower allow air to flow directly through as well as out the lateral sides. Be prepared, though, as the ID-COOLING SE-207-XT can be loud, especially at 100% load.

The Noctua NH-D15 CPU Air Cooler boasts two large aluminum heatsink towers, six copper heatpipes per tower, a smooth copper baseplate, 140 mm fans, and a few unique design elements. All of this adds up to a fantastic cooler. The famous Noctua NH-D14 was released in late 2009 and has since been considered one of the best CPU coolers ever produced. In terms of noise and cooling performance, it still competes well even by today’s standards.

However, the time has come for Noctua to replace their iconic NH-D14 cooler. Noctua’s flagship CPU cooler, the NH-D15, is built for overclockers and silent enthusiasts. If you thought the NH-D14 was enormous, wait until you see the NH-D15 because Noctua has outdone themselves.

The infamous NH-D14 had two distinct fan sizes, a 120 mm (NF-P12) and a 140 mm (NF-P14), but the NH-D15 has two 140 mm NF-A15 PWM fans. The NH-D15’s structure has been somewhat modified, and it is now slightly larger than the NH-D14. The D14’s fin stack was 140 mm wide; the D15’s fin stack is now 150 mm wide, allowing for better heat distribution. The heatpipe arrangement has also been slightly extended by Noctua. The heatpipes have been positioned wider apart to allow for more uniform heat distribution across the fin stack.

The NH-larger D15’s format allows it to handle the new NF-A15 PWM fans, which are a significant upgrade over the NH-stock D14’s fans. The NH-D15 has the same six 6 mm twin heatpipe architecture as the NH-D14, but the fins have been recessed in the NH-D15 to make it compatible with tall memory heatsinks. The NH-D15’s size won’t be an issue when it comes to installation because Noctua’s SecuFirm 2 mounting kit makes it simple.

The Scythe Ninja 5 is a good candidate as a big, heatpipe cooler for moderate overclockers, but it battles for outright cooling domination among top-tier overclockers. Multiple heatpipes and stacks upon stacks of individual cooling fins are common features of large monolithic air coolers.

The SCNJ-5000 Ninja 5 is the latest thermal assassin from Scythe, a business that specializes in twin-blade cooling. The Ninja 5 presents itself as an imposing heatpipe tower with near-silent operation but falls short in outright thermal performance for a cooler of its size.

With support for practically every recent AMD and Intel CPU socket, the Ninja 5 may be used with almost any processor except Threadripper. The Ninja 5 comes with a fairly normal cooler mounting kit. However, it also comes with a syringe of thermal compound and a Phillips head screwdriver. The justifications of “not having everything you need” to install this cooler are no longer valid.

Six nickel-plated heatpipes run vertically through the entirety of the Scythe Ninja 5’s 41 interweaved aluminum cooling fins, which can be seen overlapping through the stack’s core. The cooler’s base has a mini-heatsink with a large groove that connects to the cooler’s mounting arm. Each of the six heatpipes is symmetrically positioned and offset to provide for linear airflow.

One weak point of this CPU cooler, however, is its size. Unfortunately, it doesn’t fit all PC cases, so you might want to check your PC, as well as the size of the Scythe Ninja 5. If it’s a great fit, then, lucky you, as this cooler is only priced at around $59.99. It surely is worth considering.